One aspect of the dilemmas of thirty-somethings, which I wrote about in my newsletter a while ago, is a focus on perfectionism and ‘wanting it all’. For example, we want a great and kind partner who is good witih children and meets all our expectations. Or we want a career that is fulfilling, enjoyable, important for the planet, and right in the center of an Ikigai venn diagram.

One cause of this perfectionism can be found in our broad interests. We’re interested in the world and all its different aspects. We’re adventurous and want to experience everyone and everything. This, in itself, is not a bad thing. If we look at our lives and compare them to previous generations, we’re lucky. Our world has become such an interesting place. But broad interests can also have a negative impact — as they can lead to not just perfectionism, but also the so-called Shiny Object Syndrome. This is something I’ve struggled with in the past, so in this article, I’ll discuss what this concept entails, where it comes from, and how essentialism can be a cure.

The Problem of Broad Interests

As an entrepreneur or someone who creates new things, broad interests and wanting (to do) it all can become a problem. Consider for instance that you want to build a new product. Perhaps you really like cooking, so you want to create a great cutting board made out of solid wood.

You start by creating a design, a logo, and creating a pre-order functionality on your new website. After a month or two of hard work, you don’t see any sales. That annoys you, and you don’t know what to do now.

Simultaneously, you’ve been reading a bit about importing products from China and selling these in your home market. This also seems like a very fun concept to pursue. Plus, there is so much information to find online on how to do this — so it might just be easier to start from scratch and build an import-export business instead.

Unfortunately, if you make this choice, it’s likely you end up with no successful business at all. Because soon after you choose to ditch the first project and start working on THE GREAT TRADING COMPANY, chances are, you think of something else to do. An idea that fits your interests even better, or is an even better business opportunity.

This idea of quickly switching focus is also called Shiny Object Syndrome. It’s a syndrome or dilemma that particularly new and aspiring entrepreneurs encounter, though you can also detect it as an employee.

Also called Entrepreneurial ADD, it’s something that you feel when you meet other people working on interesting businesses or ideas. For instance, after an entrepreneurship meetup, you may find yourself thinking about all the great businesses you heard about — and why you should emulate those, instead of continuing to work on your boring same-day-every-day small startup.

It’s easy to see why it’s called Shiny Object Syndrome. Anytime you encounter something new — whether it’s a project, idea or general area that interests you — you view it as a shiny new object. Just like a crow*, this new object is way more interesting than any other object that currently holds your attention.

And that’s an issue. In a meeting at work, it can be slightly disruptive or annoying when someone wants to talk about a new initiative they’re excited about but that isn’t on the agenda. But if your goal is to actually build or make something (whether it’s a business or a piece of art), this kind of Entrepreneurial ADD can be a real pain. That is because you often end up with nothing of value. Instead of 1 successful (but old) business, you now have 2 or more half-finished businesses that don’t work at all.

* Note that the idea that crows collect shiny objects is an urban myth! According to this amazing FAQ about crows.

The Cure: Essentialism and Focussing on Less

If you feel like you are suffering from something, you go look for a cure, right? In this case, the cure to Shiny Object Syndrome is essentialism. Made popular by McKeown’s book by the same name, the idea of essentialism is a focus on what’s important and the ‘disciplined pursuit of less’.

It’s saying ‘no’ to a lot of things, and knowing exactly when and for what to say no (and of course, to say yes). McKeown describes this as ‘becoming the Chief Editing Officer’. It’s asking yourself the question: What’s really important? If you know that, you realize that you have to edit away things of lesser importance for a greater good. Alternatively, in the words of Stephen Covey (of The 7 Habits of Highly Effective People fame):

And that is hard to do. But the reason for focussing on the main thing is not just that it keeps you from being distracted. Rather, it’s the result from this ‘not being distracted-ness’ that’s important. Because by doing so, you can give much more attention to one object, which results in far greater progress. In the book, this idea is simplified by the following picture. 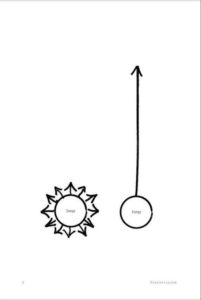 I’ve been thinking about this drawing a lot because it’s so simple and yet so perfectly describes the benefit of focussing on less. Specifically, if we combine all our efforts that we normally use to focus on 10 topics into just 1 topic, our progression increased tenfold. So whether you’re composing piano music, writing a book, building a software product, or baking cookings; if your heart is in it, and you persist in focussing on this one thing, day after day after day, the result will be amazing.

So with the idea of Essentialism, it should be a piece of cake to deal with Shiny Object Syndrome! Right? Of course, things are often easier said than done, and that’s definitely something we all experience. Even after reading Essentialism, it’s not easy to truly make the right and unrestricted choices. Because if you’re interested in a lot of things, how do you decide which of your pursuits stay and which others have to go?

If I’m honest with myself, I should probably decide to ditch this blog, my newsletter, learning Chinese, learning to program in Python, the Enter Network meetups I organize, or even all of them simultaneously. That would give me much more time to pursue what’s truly important; though I’m not really clear about what that is yet.

But even if I can be this honest with myself and stop working on all these different projects, the difficult thing about essentialism is not that you have to make the right choice once — but that you have to make the right choices every day. To make essentialism not a one-time thing, but to weave it into your life. To keep focussing on the right things, and to keep yourself from pursuing other things you’re interested in. And unfortunately, I don’t think habit tracking will help you here.

Do We Need a Cure for Shiny Object Syndrome?

So essentialism can be a cure for Shiny Object Syndrome, but we should also consider whether we actually need a cure. After all, there are some benefits of this ‘syndrome’; for instance, sometimes it’s good to stop working on a project you don’t believe in.

Specifically, the fact that you want to start working on something new like the import-export business may not be caused by its new-ness, but rather by the fact that deep down you don’t believe in your amazing cutting board product anymore. In other words, sometimes we do need to ditch a project. Not because it’s distracting, but simply because it’s not what we thought it would be.

In addition, there are real benefits to having broad interests. It means that you’re curious about the world around you. And perhaps this results in you learning new languages, engaging in new adventures, new relationships, and new experiences.

So while we can and should give Shiny Object Syndrome and Essentialism all the attention that they deserve, we should consider this: having broad interests makes our world even more intruiging than it already is.