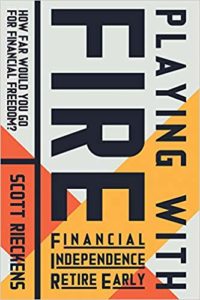 Whenever I have free time, I tend to read. Books about personal development, entrepreneurship, or a variety of other topics. One which I recently finished, is the Playing with FIRE book by Scott Rieckens.

I had heard about FIRE before, and although I found it interesting, it never really stuck with me. Now that I read the book however, I have a new-found interest in FIRE, and want to share some of my thoughts.

Before going into what the book is about, let’s discuss FIRE. FIRE, or Financial Independence, Retire Early, is a global movement, community and/or world view.

The concept is simple. People who are trying to achieve Financial Independence (or ‘FI’) are working and saving money in order to be financially independent — or in other words, not be dependent on a monthly salary.

And when you’re finally financially independent, you can retire early. After all, you now have enough money to live from, and do not need to work to pay your bills.

It may sound incredible, but depending on your level of commitment, reaching a state of FIRE is entirely possible.

“How?!”, you may ask. Well, a lot (trust me: a LOT*) has been written about FIRE, by people that know its ins and outs better than I do. By risking over-simplifying the concept, the steps you have to take are as follows:

Depending on a variety of factors, such as how far you can cut spending and how well your investments work out, you may be able to retire as early as in your 30s (!).

To many and me included, that almost sounds like a dream come true. But it’s not as easy as it sounds. And the Playing with FIRE book illustrates quite well how difficult it may be.

* If you want to read more about FIRE, I suggest these articles and blogs:

As I also stated on Twitter, the book is really easy to read, and you’ll finish it in just a couple of days. It’s a good introduction to FIRE and how anyone potentially could achieve financial independence. However, what really stands out for me is his (family’s) view on FIRE, and the way their lifestyle choices change over time.

At the start of the book, the family lives in California at the beach. With a beautiful house, a boat club membership, two fancy cars and much more, they seem to have it all.

For them, this is not so easy. For instance, the cars they have are not just a luxury, but they signify the fruits of their labor. They work hard every day, and for that they are rewarded — in this case with a BMW.

In theory, getting rid of that car means that they lower their monthly (and annual) spend, which in turn means that their ‘FI date’ (i.e. when they’re financially independent) comes more than a year sooner. In practice, it means that they choose to forego this reward, which will only be reaped (in the form of FI) in more than ten year’s time.

*Note that I keep saying the ‘book’, because the author (Scott Rieckens) has also created a documentary with the same name. At the time of writing, I have not yet seen the documentary.

And as you might expect, that is not an easy decision to make. Would you decide to not buy a particular car or house, if that means you can bring your retirement closer?

For many people in their 20s, 30s and 40s, retirement is (many) decades away. It’s a vague concept, something we don’t think about. And even if you do think about it, the choice is not so clear — wouldn’t you rather have something now than in 10 or 20 year’s time?

But the turning point for the author and his family is when they start thinking about what really matters to them. And surprise, surprise, it turns out that fancy cars don’t matter as much as you’d think. Instead, they care about spending time with friends, family, and their little daughter.

In this way, they find out that reaching financial independence sooner is actually more important than a fancy all-wheel drive BMW, or other material things. After all, that means that they can spend more time with their family, doing things they really love and care about. And eventually, this thought process results in a thought-provoking question…

Does Your Spending Reflect Your Values?

Does your spending reflect your values? In my case, I’m not sure yet what the answer is. We all spend money on things that don’t matter as much as we think we do. In my case, I’m saving up for a beamer and PlayStation 4.

So to come back to the playing with FIRE book, whether or not you (and in this case, I) actually will pursue FIRE after reading it does not matter so much. It’s a great introduction to the concept, and it definitely makes me think about whether or not retiring early is something for me (and whether it is, is something for another blog post — subscribe to be the first to read it!).

But more importantly, Rieckens shows that thinking about personal finance and your (financial) future has everything to do with what you find important in life. And that the choices you’re currently making — or the ones I’m making considering that PS4 — may not actually fit with what you really value.